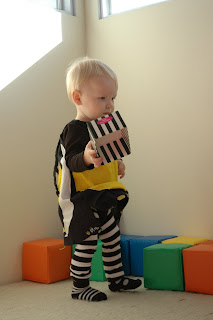 13 Months Of Looking At A Chicken:
The Stage 5 Montessori Environment
On January 1st, Nuvy turned one, took her first unsteady little steps, and became what we now know as The Experimental Toddler. It's the middle of February, and I think I'm ready to talk about it.
12 months marks a new phase of development that the gurus call "Stage 5", and that was a month and a half ago. Look at her now! She walks like a champ, even runs a little, climbs EVERYTHING, and generally behaves like a busy toddler.
Stage 5: Stage 5 is the period between 12 months and 18 months, according to this model, so we're sticking with that. If you missed the previous 4 stages, you can summaries of them in the "Stage 3" and "Stage 4" posts. The general trend in Stage 5 is to introduce a fairly wide assortment of new materials to coincide with significant specialization in all areas of the brain.
HEY WAIT A MINUTE!
This post has been sitting around in the "edit" column for two months now, and still nothing. The Experimental Toddler continues to toddle with ever-greater efficiency, speaks fluent baby and knows a few words in English. However, we are moving. The Montessori Laboratory is currently packed in a PODS container in a Philadelphia driveway, waiting to go in the new house.
Further, the Montessori experiment is about to go into overdrive as Subject Two (a second Experimental Infant) is expected this fall. To all of you who asked how this could possibly be done with more than one child, my previous answer was something like "Actually, I have no idea." I will now amend that to "I can't wait to find out, and I'll keep you posted!"
So, for everyone who wrote asking if the Mommybahn had closed for good, it has not. And I'll tell you all about the Stage 5 environment, as soon as I get my notes out of whatever box they're in.
Posted by Testdriver at 6:07 PM 8 comments: