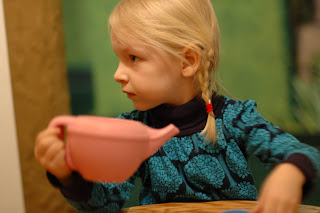 The weaning post precipitated some discussion about Montessori and food. As with just about everything else, Montessori has pretty strong opinions about how children ought to eat.

This is not a post about table setting, at least not yet, but about Montessori's ideas about food. NOLA mom remembered "something about broth"--which I had to look up. What I found was a really nice article by Jan Katzen-Luchenta detailing Montessori's writing on the subject.

She points out what preschool teachers have noticed for as long as I can remember, that the kid who's bouncing off the walls in your class is very likely the one who had a Pop Tart for breakfast, and the one who's focused and busy is likely to be the one who had an egg. The one who's a puddle of tears by 10am is often the one who woke up late that morning and came to school on an empty stomach.

I am a big believer in this, and I have often peered into children's lunchboxes when looking for the causes of behavior problems. As Katzen-Luchenta repeats: you are what you eat. This is true in a big way for kids, in my opinion.

Want some more of my opinions about kids' nutrition? Here they are.

I think that the uptick in preschool ADD/ADHD diagnoses based on school behavior (I don't mean the real ADHD kids, I mean the regular kids who are being called ADHD. I realize there is a big difference), can be attributed to two things: 1)the marketing explosion surrounding sugary breakfast foods and quickie substitutes for real breakfast and 2) the conflation by parents of the fear of childhood obesity and the idea the eating fat is what makes you fat. In my opinion, and the opinions of many nutrition specialists, kids need fat in ways that adults do not, and use it differently in metabolism. Building a body is not the same job as maintaining one, and so does not require the same raw materials. Kids need to eat fat. Fat slows stomach clearing, provides the metabolic precursors to myelin, a critical part of brain development, and helps stabilize blood sugar. Yes, your body can make fat out of sugar, but it's not the same, and eliminating fat from a child's diet alters the whole schedule of the body's metabolism, and in a way that makes the child less likely to conform to what we usually consider an appropriate eating schedule.

Montessori's "thing about the broth" was the suggestion that fat should be added to broth made for children, rather than removed. She observed (like we all do) that people are born predisposed to eat sweet things and salty things, and she cautions that many of the things that satisfy these cravings (refined sugar candies, salty pretzels) will immediately satisfy the child's hunger, but will not help the child to be stable in mood, and focused in her work. She considered it a real disservice to the child to feed him improperly, and thus to set him up for failure in his work--a failure caused by an inability to concentrate due to unstable blood chemistry. I can find little reason to disagree.

So what about childhood obesity? Are we supposed to feed our kids cheesecake and fried chicken every day and expect them to grow up to make healthy food choices? No, but this is not really as far off the mark in my view as you might think.

First, I think we can all agree that overeating and underactivity are the fundamental causes of overweight in everyone--but here, especially children. Young children are still following their bodies' signals to eat, and we pretty much agree that they should be allowed to eat when hungry and be given adequate opportunity for physical activity. So tell me what you think of this:

If the fat content of a child's diet is inadequate, her blood sugar (and the associated signalling chemicals) will be unstable and will cause the child's period of satiety to be shorter than normal. Thus, the child will feel the need to eat more frequently. If the child feels the need to eat frequently, and is given calorie-rich, but fat-poor foods (how many "fat free" snacks are available in the supermarket these days?), the child will end up eating more calories than she needs, and will gain excess weight. Couple that with a few hours of screen time every day, and you can see where you're headed. Fatty foods in a child's diet help the child develop better eating habits.

Can you believe it?

A child who has eaten a fat-rich meal (something with cheese or cream in it) will stay full longer, and in a better mood longer. Now, watch me tie this to ADHD. Ready?

Remember when your kid was a little baby, and all the baby books said "crying is a late sign of hunger." What they meant was that, if your kid is crying from hunger, you have missed some earlier signals, and now your baby is REALLY hungry. Anyone remember the "early" sign you were supposed to look for?

Right. Heightened alertness, increased activity, irritability. I believe that was the order. These are early signs of hunger in children. They are nature's way of inducing the body to get up from whatever else it's doing and feed itself, and they come on before the child is able to articulate that what she needs is to eat. If the other thing it's doing is, say, school activities, and food is not offered, that extra activity will be seen in other ways. Things we would consider misbehavior, lack of focus, hyperactivity.

The Crisis of Weaning 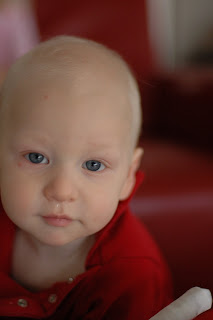 So, it's come down to this. My dear, sweet, beautiful boy has got to be weaned if he's to live to see his second birthday. Van, alas, is a nipple biter. It's fun to bite them, and funny to have Mommy scream "ouch!" and push him away by his face (yes, I know the smother-him-with-your-boob trick, but when I tried this with Van, he nearly bit it clean off.) This is not the loving, respectful interaction I always imagined.

As many of you know, we have, to date, been living the joy that is tandem nursing. If you want to know my opinion about tandem nursing, it's don't do it. Friends, I have loved, and do sometimes still love, nursing my children. It's sweet, snuggly, and oh so convenient, but I must tell you that after three years plus of nursing, and a year and a quarter of nursing two, a lot of the time I just wish the little parasites would let me go. If you're enjoying your tandem nursing experience, please let me and everyone else know how you did it. I'll raise my glass to you. If know what I mean when I say I want to go hide somewhere where nobody is touching me, you can come over here and sit by me (but not too close!). If you're knocked up and on the fence about this, my humble advice is to wean the first one while your milk is out. You'll be supermom anyway. Trust me.

La Leche League Ladies, I love you, and I love your work. I'm just saying...

And yes, I know Montessori is outwardly opposed to extended nursing. Nursing past about 9 months, according to Montessori and Silvana Montanaro (Understanding the Human Being--my post about it here) prolongs the child's dependence on the mother unnecessarily, and both agree that weaning to a cup should take place immediately after solid foods are introduced, I don't know if I would go that far. Montessori was weaning orphans from a bottle, and Montanaro extrapolates this to weaning a baby from the breast. I do think there is some emotional bonding that occurs after 9 months for extended nursers that is valuable, even if it's not indispensible. So, while I have already made several posts as an extended nursing apologist, the time has finally come for me to cry "uncle".

So here I am ready to sit down across the table from Drs. Montessori and Montanaro for another crow sandwich and a slice of humble pie. As I've quoted before, Montanaro asserts that we late weaners hang onto nursing out of fear that that children will take off into the environment and leave us, unneeded and cast-off, in a corner somewhere to wither and die. I must admit that I live with another fear: I am afraid of the hell my peaceful house will be with two screaming weaners in it. Patience with shrieking infants is not something that comes naturally to me. That, fundamentally, has been the driving force behind my extended nursing. There is a lot I am willing to do for peace in the house.
Epilogue:
I left off the last paragraph at least three weeks ago, and we are still nursing--all three of us. Peace reigns, more or less, and we have sort of worked out a way around the biting. Even now, in my better mood, I would caution all you girls who are pregnant with a second one and still nursing the first, this is no small feat, nursing two. I'm doing it now, but I would have done it differently. We'll continue to work the wean in our own way, and if it's ever done, I'll let you know. The minute...
Posted by Testdriver at 2:32 PM 16 comments: