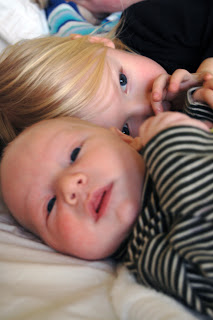 Only Three Crises? Would Somebody Please Tell the Kids?: Dr. Silvana Montanaro Hits the Highlights.

Did I say soon? I guess I meant "someday."

A reader asked me about Chapter 11 of Montanaro's book "Understanding the Human Being". It is the case with many Montessori riffs, and I suppose mine is no exception, that many aspects of Montessori philosophy come in and out of favor in the general literature, and can often fly in the face of the common wisdom du jour. Maria Montessori lived and worked in a moment in history, as do we all, and time does march on. Parenting and education trends wax and wane, pediatric wisdom fluctuates, and developmental academics come up with ever more sophisticated ways in which we are all damaging our kids to death.

So, Dr. Montanaro, before I begin to tease apart your three crises of infancy, I bow to you in your time (1955, to the publication of this book in 1991), but must nonetheless live in mine. Many of my ideas will surely seem wacky in the context of Dr. Montanaro's experience, and also to the folks who take the next MMI Infant-Toddler course they offer. As I said, time does march on.

A Crisis according to Dr. Montanaro

Montanaro defines "crisis" in a more neutral tone than we commonly associate with the word. Crises, in our common parlance, are associated with horrors, and generally seen to involve some experiential meltdown. To be sure, her three crises: birth, weaning, and opposition, come with plenty of inherent trauma, but crisis here means a transitional challenge of everyday epic proportion, rather than an extraordinary or malignant catastrophe. Dr. Montanaro's commentary on these crises is focused on helping the parent support the child through each crisis with respect.

The crisis of birth.

This one, certainly, is a crisis in the traditional sense (childbirth is definitely dramatic every time, isn't it?), as well as in the classical sense (the greek "judgment") of Dr. Montanaro.

Montanaro riffs a bit on the ways in which the infant is "tested", such as essentially coming off life support and into a totally foreign and newly variable environment. Her take-home message here is that the parent should be careful to recognize the competence of the child, recognize what must be a staggering degree of disorientation associated with birth, and to allow the child to do what he is capable of doing independently. I have often said a version of the same thing to the parents of infants, toddlers and bigger kids, too: "Your child is at least as smart as you are, only less experienced."


She discusses Montessori's "unveiling of the environment" in the context of allowing the baby as much opportunity for independent discovery as possible, while providing all the necessary support. Please see the Stage 1 post for more on that. She also invokes a little Freud, in defining birth as the beginning of the oral stage of development, with the mouth as the barrier between the self and the experience of environment.


I think the major benefit of discussing the crisis of birth, which seems pretty self-evident, is to set up some reference points for discussing the subsequent two: weaning and opposition.

The crisis of weaning.

Ok, as many of you know, here is where I get off the bus and walk for a little while. I am not entirely sure I'll reach the Crisis of Weaning before I reach the Crisis of Opposition, but Dr. Montanaro posits that one should press the issue at eight or nine months. She seems to anticipate the resistance of mothers like me, who decline to wean their children on time (I am--gasp!--tandem nursing.) by invoking the idea that the time has come to foster our child's independence by taking him off the breast. She asserts that nature has indicated his readiness to wean by making him receptive to other kinds of food, and so to prolong nursing is to retard the child's progressive independence. She has some fairly stern words for those who elect to continue nursing beyond this point. I have to say that I'm very much on the fence about it.

I have to concede that she might have a point about the missed sensitive period. With the introduction of food, the milk demand and supply did naturally diminish for us, so that I kept expecting Nuvy to just quit nursing one day, and there really was a time when she would go for days at a time during my second pregnancy, when the milk went to nothing. Oh, but once the baby was born, I had the goods once again, but now the dynamic was much, much different. Nursing became a negotiation. If Van can drink from the boobie, why can't she?

As we all know, there are so many nuances to the nursing part of a mother-child relationship that it can hardly be viewed as just feeding. The AAP now recommends a year, at least, but they also recommend a lot of tummy time, and I don't do that, either. I can't really judge the degree to which extended nursing has prolonged her emotional dependence on me. She seems not to have failed to exercise her independence by putting physical and behavioral distance between us intermittently--as she is expected to do at this age, but if I could turn back the clock, I would have tried harder to give her a "lovey", as now she relies on a peculiar combination of thumbsucking and Relentless Nipple Torture (RNT) to get to sleep. Mind you, only Mommy is subjected to this flagrant violation of the Geneva Conventions. Daddy, both grandmothers, and the babysitter can all talk their way out of it.

Montanaro asserts that, at this point, a hug and a snuggle for the purpose of pure loving physical contact is what is needed, and that nursing keeps the child dependent. Possibly true. Nuvy has been pretty clingy since Van was born, so it's hard to tell if it's extended nursing that's to blame, or if it's baby-displacement trauma.

Montanaro is concerned that those of us who wean late do so out of fear that the weaned child will break off the relationship with the mother and go off independently into the environment. I don't really identify much with this fear, and I do definitely remember her going out and exploring her environment very actively by way of her mouth, and every other means she had, at about the time Dr. Montanaro recommends weaning to facilitate this exploration.

Maybe I protest too much. So I didn't wean her. I decided that self-weaning, it might be argued, falls under the "follow the child"/empower the child heading, rather than the parent-centered/child-centered heading. At this point, it's all child-driven.

The crisis of opposition.

Dr. Montanaro, in my (wishful? hopeful?) opinion, times this crisis a little late. 30-36 months is the time frame she gives, but for us it seems to have started earlier (please tell me it has, and that we are going to get through this soon). We were experiencing the described behaviors at about the 24 month mark, and now, at 27 months, we are fully engaged in the "terrible twos".

It doesn't really feel as if there is anything revolutionary about the suggestions or the philosophy in this segment. Dr. Montanaro offers the very same platitudes about offering limited choices and respecting the child's place in the family that you can read in Parenting magazine, babycenter.com, and pretty much any mainstream source for parenting support. Of course, it's entirely likely that this strategy proved so absolutely reliable that it has, since the time of writing, become the common wisdom.

I am definitely a big believer in offering choice and encouraging participation. However, you will probably find, as I have, that your child will find the sticking point and oppose you there, no matter what you do, or how much you mean to enfranchise her. Case in point, the choice-between-two strategy is short lived, once the child is aware that more than two options exist. It goes like this: "Nuvy, would you like an egg or some oatmeal for breakfast today?"

"We have eggs or oatmeal. Which would you like?"

She is able to hold in her mind all the options for food that might appeal to her, and does not consen to be limited by my limiting her choices. We run into this with footwear often, too.

I will say that, contrary to my "firm and consistent" instinct, I do offer Nuvy opportunities to persuade me with a bargain. To bargain with two-year-olds might seem a dangerous game, but it does seem to make her more open to discussion when the tables are turned. We do not, however, bargain over rules. I think it's an important distinction. Bottom line, so far I haven't found any magic bullets here, and believe me, I'm looking.

The good news is that Nuvy's newfound self possession has made her feel both empowered and responsible. She begins to want to take care of things, talks to dolls, sincerely tries to comfort her crying baby brother, and has even become intermittently kind to me. So far, two is still more sweet than terrible.